The early history of the church at Huish Champflower is obscure and dates back to Norman times and perhaps beyond.  The first mention of a chaplain in the village is in the year 1187 and it is noted in 1226 that there is a church building.  Clearly there was a church community in the village in early medieval times.  Thomas de Huish Champflower was the Patron and had the responsibility of providing a priest for the church up to the year 1297. The font is circular and probably Norman. It has a ribbed cover which is believed to have been added in the 17 century.

During this time, one of the six bells in the church tower was cast by Robert Norton of Exeter who worked between 1410 – 1440.

The wooden lectern eagle is also of medieval origin with its body dating from the 15 century although the wings are 19 century Victorian.  Presumably the original wings needed replacement.

So far as is known nothing of the original Norman building has survived.  It is believed that the main body of the present church and probably the tower can be dated to the 15 century.  It is thought that the church was built at the time of the Lancastrian and Yorkist monarchies, around the period of the Wars of the Roses.

Sir John Tyler was Rector during this period.  The title “Sir” was given to a Parish Priest in those times.  John Tyler had an eventful life as Rector since during his incumbency the upheavals of the Reformation broke upon and around the church which included –

Did John Tyler survive in office in order to keep his job, or was it out of care and loyalty to the people of Huish Champflower with a concern to be their priest through all the momentous changes of the times?  One thing is certain we cannot know John Tyler’s views on the momentous events of his day.

One of the earliest acts of Reformation by Henry VIII was the dissolution of the monasteries with the purpose of removing those bodies which had become corrupt, rewarding his friends and financing the king’s wars with France and Scotland. 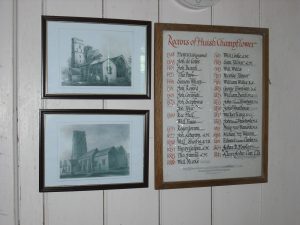 One of the dissolved monasteries was Barlynch Priory and tradition holds that the six light east window in the north aisle with its 15 century glass was transported from Barlynch to Huish Champflower.

The window is acknowledged to be of brilliant workmanship and contains six figures, five of which are in the tracery lights.  Three of them are given names Toni, Agges and Abraham.

The basic design was originally a Tree of Jesse illustrating the forebears of Jesus.  There is a stem of a vine shown in clear glass, the grapes either white or ruby and leaves of green or white glass.  The background is blue.  The heads and headgear of the five figures in the tracery lights appear to be contemporary, as is some of the background.

The piers between the nave and the aisle may also have been removed from Barlynch.  They don’t quite fit their present position and are thought to be of a 14 century rather than a 16 century design.  They have an unusual section of a core with eight attached shafts.  The windows on the north wall are of a typical 16 century design and fit with the supposed date of the aisle’s construction.

In 1534 the Church received a bequest to build an “ambulatorium” and it is likely that the building project in question resulted in the present north aisle.  In 1535 the Church was dedicated to St Peter. There is a Communion Cup with a date 1573.

Four years later he was accused of a variety of sexual offences, was tried, found guilty and hanged.  His life was far from exemplary but there is considerable doubt as to whether he was guilty as charged.

In many parishes priests were dispossessed by the Puritans during the Commonwealth.  Subsequently, the Puritan appointee was removed at the Restoration.  But NOT in Huish Champflower! A certain tenacity was exhibited.

There remains a door in the north wall with a staircase and an exit which would have provided access to a Rood loft which was still in place in 1683.

It is recorded the Samual Taylor Rector for this period was buried in the chancel of St Peters – six feet deep!

It is recorded that there was a Singing Gallery in the north aisle in 1713 but by 1795 this had been replaced by a Singing Gallery under the belfry.  It would be unusual for such a gallery to accommodate a choir during the 18 century but the music was usually led by a group of musicians playing a variety of instruments probably with very doubtful levels of expertise.

There is some evidence of a medieval screen on the north aisle being removed to Bicknoller in 1726 though no reasons for this removal are given.

At the beginning of the 18 century there was a three decker pulpit with a seat for the Parish Clerk who was responsible for saying and singing the responses, a seat for the clergyman conducting the service and the top deck for preaching.

William Darch who died in 1832 was also buried inside the church.  Since then the custom of burying Rectors in the Church seems to have died out.

The Victorians are responsible for the appearance of the nave and chancel which we see today.  There was a major restoration between the years 1875 and 1880 when the chancel arch was replaced and the windows remade.

The tower and its arch had been remade earlier in Queen Victoria’s reign, in 1846.  The encaustic tile reredos probably dates from the 1875 – 1880 restoration.  There is no evidence of St Peter’s nave before the Victorian period.

In 2001 major work was carried out to repair the lights of the north aisle east window and to clean the precious glass, so restoring it to its original clarity.

By 1606 there was a glebe house providing accommodation for the Rector. It had a wainscoted hall and a parlour with six glazed windows.  There was also a gatehouse, a bake house and a dovecot.  The house stood in ornamental grounds above a lake.

Thorough repair was undertaken in 1815 and further work between 1836 – 1838 creating a square symmetrical house of three bays with a shallow pitched roof, arranged around a central well.

The house was destroyed by fire and rebuilt with the help of parishioners in 1924 and was eventually sold by the church commissioners in 1972.